By Tyrone Heade on July 2, 2018 in Announcement

Kids:  They dance before they learn there is anything that isn’t music.  — William Stafford 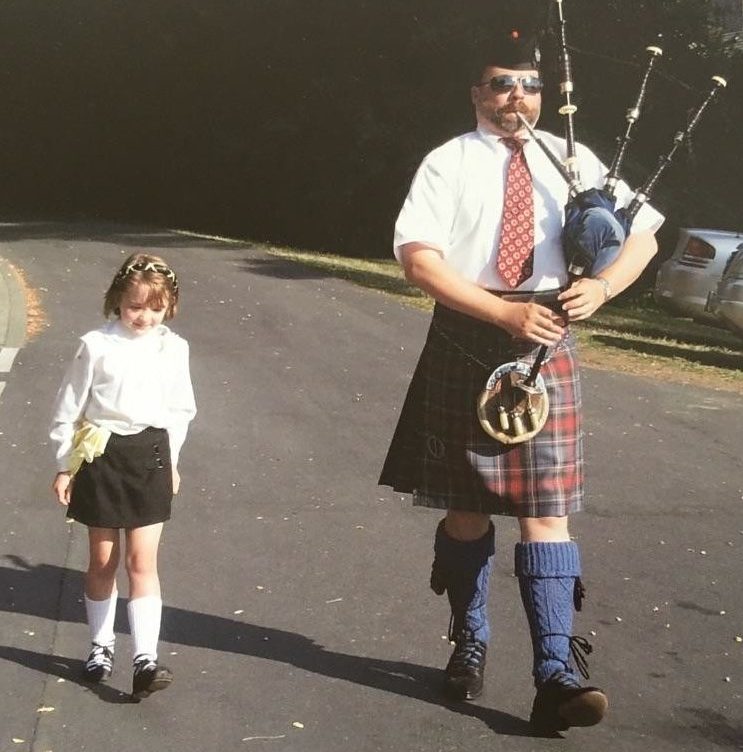 6 year old Marie O’Connell, and myself, on our way to dance/play for her Grandfather’s 80th Birthday, Lincoln Park, Seattle 2006

I first met Marie O’Connell when she was 6 years old.  It was her grandad’s 80th Birthday celebration in Seattle’s Lincoln Park, and I was called to help with the festivities.  Little did I know there would be a wee Irish dancer along to help.  It was a hot Seattle day, and the celebration was a good one.   But the memory had been buried underneath so many others.

Fast forward to 2018 — The pipe band I direct, Seattle’s Elliott Bay Pipe Band, was performing our 22nd Annual Father’s Day Concert at the local Hiram Chittenden Locks.  It’s always a lovely outing of music with the Band giving back to the community, our audience filled with families that grow with kids each year — a true annual Father’s Day trek for families near and far.  Irish dancers join us too, most recently Seattle’s Tara Academy of Irish Dance, providing a lovely visual accompaniment to Elliott Bay’s jigs and reels, swooping in whenever dance tunes are played.

Sara Williams leads Tara with the rest of her family, a 3rd-generation Irish dance teacher who’s students include champions and principle dancers in international shows of Riverdance.  After the concert last year, Sara told me one of her dancers recognized me from a 2006 family performance — with photographic proof!  Marie O’Connell has been dancing with Elliott Bay for a few years, and little did I know we had met so long ago.  We took a matching photo to celebrate our ‘ongoing collaboration’.

The longer you live your passion, the more new beginnings keep coming at you.  Couples I’ve helped marry now have children and special anniversaries they want me to play for.  Young students I taught from 9 thru college have me and the band perform at their weddings.  And, after nearly 100 compositions, I’ll be adding more this week — a march for Rod McKenzie, in honor of his being the 10th Chieftain of the Skagit Valley Highland Games; my first Piobaireachd; and hopefully a short suite for Scottish instructor (and friend!) of mine, that penned the 2/4 March “Pipe-Major Tyrone Heade” (gobsmacked with that one, so turnabout is fair play I think…).

The Language of Bagpipe Music
Picking Up the Bagpipe Banner