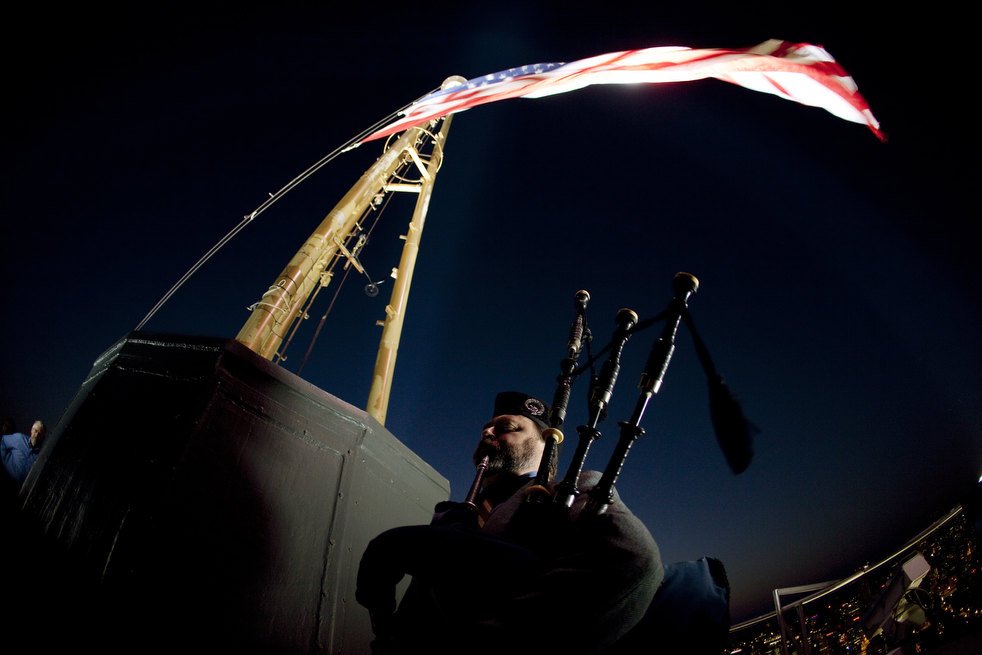 Tyrone plays bagpipes as a U.S. flag is raised on the roof of the Space Needle in Seattle in the early morning of Sept. 11, 2011, on the 10th anniversary of the Sept. 11, 2001, terrorist attacks. The performance included West & Liberty, a hornpipe he was writing at the time of attacks. AP Photo/Ted S. Warren

Five of Tyrone’s custom bagpipe compositions were selected by Bruce Gandy for his 2005 Contemporary and Traditional Music for the Highland Bagpipe, Volume Four.  Bruce’s four volumes over 16 years are credited with raising the bar internationally for modern bagpipe repertoire.

2017 – In a rare, “Juried Critique” with a live audience, 3 top musicians from Canada and Scotland wrote the following as Tyrone played a medley of three Original tunes…

“Lovely, gentle.  Compositionally I like how the phrases build and suspend in parts, then set down smoothly in the resolve.”

“Beautiful tunes – I would love to hear more of some of your other compositions as well!  :)  Loved it!”

Commissioning a bagpipe tune is a unique way to celebrate an event or someone special. An original tune may commemorate an anniversary, family gathering, personal achievement, a place that is deeply personal, or perhaps a person you hold dear.

Tyrone’s compositions reflect the subject of your choosing. Jigs, reels, airs, marches and hornpipes or classical Piobaireachd are created to bring a ‘tone sculpture’ to life with the bagpipe’s traditional nine-note framework.

Original two-parted or four-parted tunes are available for commission. The final melody is available for presentation, framed as a document, written by hand if you like, but usually professionally typeset. Recordings of original compositions on CD, whether on Highland Pipes, Small Pipes, or by an ensemble are an option.